Why use Picasso in your Art Lesson?

Pablo Picasso was like a bull, very strong willed, always looking for new challenges and never satisfied with his achievements. He had an insatiable appetite for creating new ideas and for loving the many women in his life. At the age of 5 he could draw brilliantly and by the time he was a teenager his paintings would not have looked out of place next to Rembrandt’s. By the age of 19 he was asking ‘why should I paint like this for the rest of my life?’ So he abandoned academic painting and set about developing his own ideas. The consequence was that he completely changed the course of art in the 20th century.

For a great introduction to your school’s art workshop check out Picasso lesson ideas. You could also integrate some of the following points to justify to children why Picasso is important.

Let’s look at his life and work how it might be used in the classroom to stimulate debate. Picasso is a confident, extrovert character who works extremely hard and is constantly looking for new challenges, yet his personal life is full of contradictions. Here are some general points that could be made.

Never Giving Up
Picasso was always looking for new ways of creating art. He thrived on change and on never being satisfied with the ordinary. Every obstacle became a new challenge and often resulted in his painting or sculpture taking off in a new direction. “I am always doing the things I can’t do, because that is how I get to do them.”

Being Confident with his own Ideas
Picasso could create great art from the most obscure items, forcing us to look at the world in new ways. He once placed a pair of bicycle handlebars above a bicycle seat and called it a bull. It does actually look like a bull! He ignored the ridicule from doubters because he believed his own ideas were something special. He was not a person to be racked by self doubt in regard to his work.

Not resting on his Laurels
No sooner had Picasso mastered a style than he changed it. He was not an artist who on finding a brilliant idea milked it for all it was worth. He would develop the idea, but when it no longer inspired him he would drop it and move on to something new. ‘To copy others is bad, but to copy oneself is far worse.”

Picasso was like Mozart in that he a child prodigy. By the time he is a teenager he is painting like an ‘old master’. At the age of 27 he has embarked on his Cubist style and has changed the course of art history. Picasso’s famous phrase, ‘I do not paint what I see I paint what I know’ explains a lot about his work. His work is about self-analysis, about how he feels about something as opposed to how it is seen.

Compare paintings of Marie Therese Walter at the height of his affair with her, with those paintings of Dora Maar at the end of their affair. In one his brush strokes curve sensuously around the painting exuding passion. Where as in the other the brush marks are angular, aggressive and display dramatic violence. He sometimes paints from more than one viewpoint, making us work out from ‘clues’ in the painting what the theme of the painting is about.

Never just look at a Picasso and ask ‘what is it supposed to be?’ Try to look beyond the surface of the painting, look for clues, imagine different viewpoints and imagine you are in the painting. Picasso wants you to work with him, because he is not going to give you the full story. A great example is a painting he did of Olga and his son Paulo. The painting depicts Olga as a very well built, statuesque figure of almost giant proportions, holding her baby son who is giggling at her. We know Olga was a ballerina, tall slim and very elegant, not at all how Picasso depicted her. So why did he paint her so big, look at the painting from the child’s point of view and the whole thing makes sense.

It looks like a photograph, it must be ART 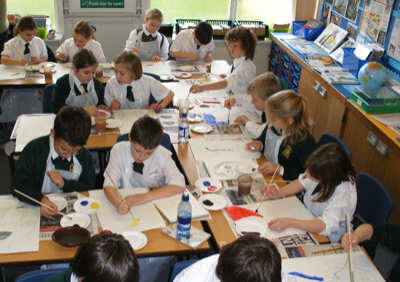 The Importance of Art Education

How to Organise an Art Lesson

We use cookies to ensure that we give you the best experience on our website. If you continue to use this site we will assume that you are happy with it.OkNo