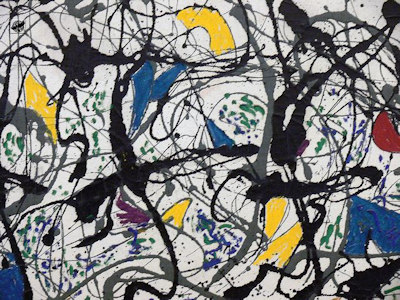 Jackson Pollock the great American abstract artist began his art studies in painting in 1929 at the Art Students’ League in New York. During the 1930s he was influenced by the Mexican muralist painters (Orozco, Rivera, Siqueiros) and by aspects of Surrealism painting.

From 1938 to 1942 Jackson Pollock was employed by the Federal Art Project, painting billboards. By the 1940s he was painting in a completely abstract manner. The `drip and splash’ style, for which he is best known, emerged with some abruptness in 1947. His form of abstract expressionism, ‘Action painting’ as it was sometimes referred to, was dramatic to watch being created. Jackson Pollock would lay his canvas to the floor and pour and drip his paint from a can. Instead of using brushes he manipulated the paint with `sticks, trowels or knives’. He would create a heavy impastos (thick layers of paint) by adding a mixture of `sand, broken glass or other foreign matter’. This form of abstract expressionist painting was quite unique.

This manner of action painting had, as already mentioned, links with Surrealist theories of automatism. It aimed to create the direct expression or revelation of the unconscious moods of the artist. In other words, the action of applying the paint was influenced by his mood or feelings. Hence when angry, the application of paint is aggressive, thrown or slashed on to the canvas.

Jackson Pollock’s name is also associated with the introduction of the ‘all-over’ style of painting. This seeks to avoid points of emphasis within the canvas and therefore abandons the traditional idea of composition. The design of his abstract paintings had no relation to the shape or size of the canvas. Indeed, in the finished work the canvas was sometimes trimmed to suit the image.

These characteristics were an important element of the new American painting, which matured in the late 1940s and early 1950s. Pollock was strongly supported by the majority of art critics, but was also subject to much abuse and sarcasm. In 1956 Time magazine called him `Jack the Dripper’. But by the 1960s, he was generally recognised as the most important figure in abstract American action painting. Unfortunately, he was an alcoholic and his premature death in a car crash, at the age of 44, just added to his cult status.

“When I am in my painting, I’m not aware of what I’m doing. It is only after a sort of “get acquainted” period that I see what I have been about. I have no fears about making changes, destroying the image, etc., because the painting has a life of its own. I try to let it come through. It is only when I lose contact with the painting that the result is a mess. Otherwise there is pure harmony, an easy give and take, and the painting comes out well.” Jackson Pollock.