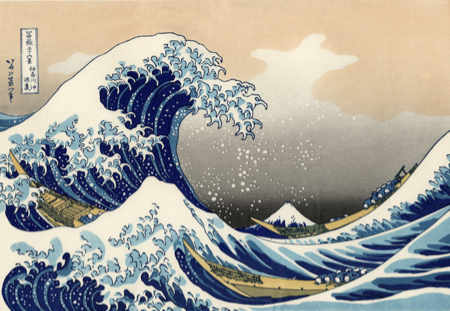 Hokusai was born in the autumn of 1760 at Honjo Warigesui, in Katsushika of Shimosa Province. It is very close to the old city of Edo, now Katsushika ward of the city of Tokyo. In later years, Hokusai called himself “the farmer of Katsushika” and often used Katsushika in place of his family name.

Details surrounding his earliest years are uncertain. It is thought that his family name was Kawamura at birth, and that he was adopted when he was four or five by Nakajima Ise (possibly his natural father). Nakajima Ise was a mirror polisher working for the Tokugawa Shogunate. Hokusai was first given the name of Tokitaro, but at the age of ten this was changed to Tetsuzo. It was around this age that he started to learn woodblock carving, because of his ability he was soon apprenticed to a book-lending shop. Here he continued his study of painting and drawing from the picture books he found in the shop.

At the age of nineteen, he was enrolled in the school of Katsukawa Shunsho, one of the leading woodblock artisans of the time. He specialized in portraits of popular actors. Around this time, Hokusai was given the name of Shunro. This is the time he was mainly engaged in creating book covers and portraits of actors.

In 1792 after the death of Shunsho, the Katsukawa school (studio) head, Hokusai left the establishment because of a disagreement with the master’s successor, Shunko. This was to prove to be a major turning point in his life.

Though reduced to poverty, he continued to study, concentrating on the techniques of other wood block artists such as Kano Yusen, Tsutsumi Torin, and Sumiyoshi Naiki. Hokusai was greatly interested in the examples of Western art that filtered into Japan through the Dutch trading post in Nagasaki. He frequently changed his artistic name. In fact, more than thirty times during his career. The names Shunro, Sori, and finally Hokusai are used during this period.

After a long search for this true style, he settled on landscape painting around 1798. This was possibly because engravings brought in by the Dutch were much admired. Around this time he gave the name Sori to his most promising pupil and took the name Hokusai for himself. From this point, he avidly observed and sketched everything in the world about him. This resulted in him publishing the results, starting in 1814, in a series known as the Hokusai Manga (sketchbooks). The series would eventually run to twelve volumes.

From around 1823 to 1831, he created and published the epoch-making series of woodblock prints known as The Thirty-six Views of Mount Fuji. The series would be very influential on western artists when Japan began to open its trade in the west in the 1860’s.

This series was created when Hokusai was between the age of 64 and 72 and shows proof of his remarkable energy during his advanced years. Hokusai was completely obsessed with producing ukiyo-e (woodblock) prints. He lived for nothing else. Hokusai often would get up early in the morning and work until after sunset. His art name Gakyo-rojin, that he used from 1834-1849 actually means; Old man mad with painting.
In his autobiography he described his philosophy of art:

“From the age of five I have had a mania for sketching the forms of things. From about the age of fifty I produced a number of designs, yet of all I drew prior to the age of seventy there is truly nothing of great note. At the age of seventy-two I finally apprehended something of the true quality of birds, animals, insects, fish and of the vital nature of grasses and trees.

Therefore, at eighty I shall have made some progress. At ninety I shall have penetrated even further the deeper meaning of things. When I reach one hundred I shall have become truly marvelous, and at one hundred and ten, each dot, each line shall surely possess a life of its own. I only beg that gentlemen of sufficiently long life take care to note the truth of my words.”

From his mid sixties onwards he was at the height of his creative powers. In addition to The Thirty-six Views of Mount Fuji, he also created such masterpieces as the series Chie no Umi (One Thousand Seas, 1826), Shokoku Taki Meguri (Journey to the Waterfalls, 1833), and Ryukyu Hakkei (Eight Views of the Ryukyus, 1829). The energy in these works is breathtaking, plus the fact they look so ‘modern’.

At the age of eighty, he was still busy producing a huge number of prints. He died on 18 April, 1849 at the age of 89. He occasionally referred to himself “the mad painter”. He was an eccentric man with an amazing ability to synthesise landscape down to its essential elements. Despite apparently moving house a staggering 93 times during his lifetime, he managed to produce around 30.000 works of art before his death. His work also influenced many 19th century painters such as Vincent van Gogh